Transparent Mobiles. Will, you get 1? Are these Better ? 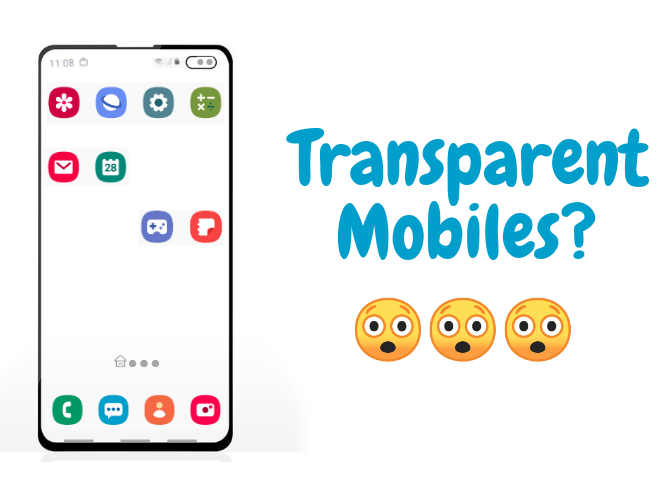 So, it’s been since the iPhone 7 Fake leaks. We were waiting for all display mobile, which has kind of become reality after the launch of Mi’s Mix Alpha. But, from the Sci-fi movies, we have been crazy about transparent Mobiles especially after one of the fake iPhone-X’s Leak.

So, let’s talk about what’s going on in research for this. As usual, Samsung has been doing this since 2013. They have Patented some design regarding this in 2013 which was kind of unbelievable back in 2013 but now after the Galaxy Fold and Flip Series. It seems to be possible that we would see a Transparent Phone in few years ready to lessen the weight of your Pocket. Maybe until we are ready for 6G or Sooner.

So, here are some Patents:-

So, let’s dig more into the Tech. So, it started when there were few Prototypes of transparent wires that began getting viral, So it was obvious that there was a race that began for making, every possible electrical component to be transparent. You must have Listened About All Glass Keyboard, a company used Sensors on Bezels to Detect Finger Placement And would work.

Now, They are trying to do it on Mobile Components. From the First Patent, it was much Clear that Samsung tried to make it Usable From Both Sides, and the 2nd Patent is not officially made by LetsgoDigital. So, we can’t count on that. So, the idea is that You can just Flip the Phone, and start using it.

Now, let’s talk about What if some Components can’t get transparent what will they Do then? It will be Like half-transparent and half-Opaque. Some components like Cameras, Sensors can’t be made transparent. So, like Mi Mix2. They Can shift These in Bezels.

So, let’s Talk Is this Needed to Have Transparent Mobile in your Pocket? How much Practical is having an all Glass/Plastic Phone?
The answer to these questions is yes and No both of it. Let’s Talk About it Now, See now if you read my previous blog about 6G, You know that 5G and 6G are all about VR, AR, MR, XR(Virtual Reality, Augmented Reality, Mixed Reality, Extended Reality ).

Now, if you know about Game Pokemon Go. Then, You must have felt its fake and just representation of AI on your Screen because the Phone Acts as a Barrier between Augmented Reality and the User. So, if there is See-through/ Transparent Mobile then there would be No-such Issue. Also, there would be a virtual world Out there.

Now, next, is why NO? See, the only Practical Use of This Concept. So, why should I hold a device in My Hand Every Time? If already till that Time I could have Purchased AR Glasses which Do, the very Same Work. If there are AR Glass then there would be no Hand Interruption too. Even instead of getting Transparent Mobiles or Screens all around, we will just need one spectacle for all.

These would be tough Competition to Mobiles, and who know Mobile would be treated as just a gaming device. Then we will get a Digital Vision for real like, think we will speak “Ok, Google tells me the location of this Restaurant” and we will see real blue roads to the way. These things are way too far to be implemented worldwide.

So, this is done for Transparent Mobile.

Thanks, for Reading so far, Do like if you Liked It, Share and subscribe via E-mail. You must give your time worth reading my Previous Blog.